This competitive fellowship encourages students to perform acoustics-related research at the university in exchange for a compensation package that includes a stipend and payment of tuition and fees, a $3,000 cash award, and support for attending professional meetings related to their research.

icon of an award seal with two ribbons

There is no formal application process. A selection committee of university faculty and ARL:UT researchers chooses fellows from a pool of students in the university’s acoustics graduate program, and a faculty member associated with ARL:UT supervises the dissertation or thesis of the McKinney Fellow. Other ARL:UT research staff may also be appointed to the student’s thesis or dissertation research committee.

icon of a teacher at a chalkboard

Chester McKinney graduated as the first physics major from East Texas State Teachers College in 1941. During World War II, he served as a radar officer in India, China, and Tinian as a member of the 58th Bomb Wing, the first B29 wing.

McKinney earned a master’s and doctorate in physics from The University of Texas at Austin. During graduate school, he worked in the Department of Physics and at the Defense Research Laboratory (DRL), which later became ARL:UT. After graduation, he taught at Texas Tech before returning to DRL to develop a program in high-resolution minehunting sonar. He became the assistant director, associate director, and finally, director of ARL:UT until his retirement in 1980. He was a founder of one of Austin’s earliest technology companies, Texas Research Associates, which later became Tracor. Dr McKinney was dedicated to the mission of the university and continued working as a consultant at ARL:UT until his death in January 2017.

icon of a graduate 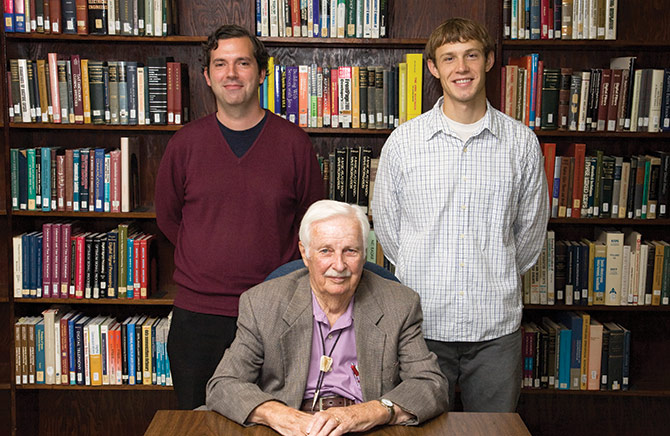 icon of a retro 35mm camera

Dr. Chester McKinney speaks at the retirement of Dr. Claude Horton in 1978. Horton came to work at ARL:UT in 1945, also serving as a physics professor and eventually chair of the UT Physics Department.